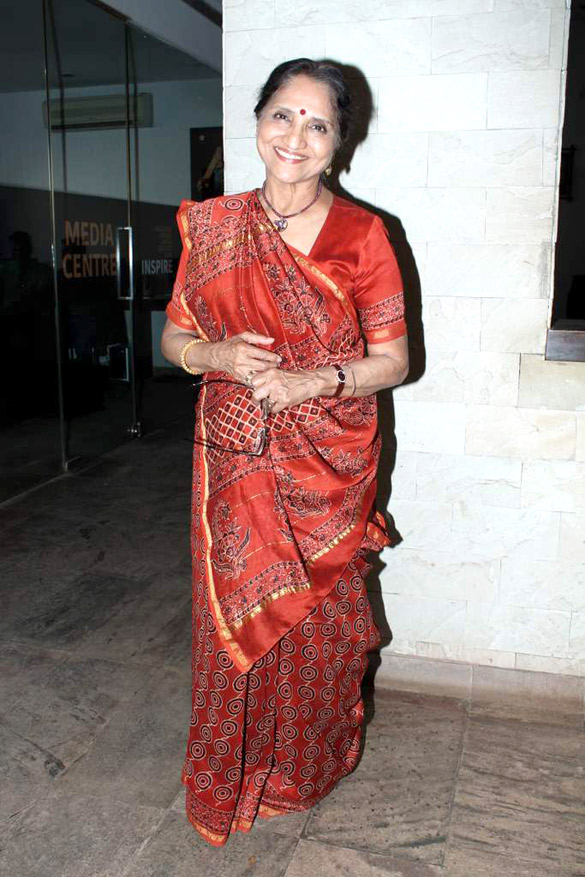 Padma Shri recipient Sarita Joshi is a celebrated stage, television and film actress. The veteran of Gujarati theatre and Marathi theatre and Marathi cinema, believes that “Hard work, honesty and punctuality, these three things which should always be maintained in life, because lethargy is something that will not work, and always remember that time is money.”

Joshi, who turns 79 next month, is widely remembered for her role in the Star Plus hit dramedy ‘Baa Bahoo Aur Baby’, for which she won many awards. She is known for her Gujarati plays done with her husband Pravin Joshi in the 1970s. Joshi is part of ‘Sakubai’, a Zee Theatre teleplay on the story of a common and yet uncommon woman. It tells the tale of all those women who play an indispensable part in our lives and whom we ubiquitously address as ‘bai’. The play is directed by Nadira Zaheer Babbar and will be telecast on Dish TV throughout this month. Excerpts from her interview:

Please tell us about your beginnings with Gujarati and Marathi theatre.

I was in a school in Baroda and my first stage performance there was a play where Shanta Devi Maharani gave me a prize for it. I guess I was noticed there. There was an opening in a traditional play which had film actors like Ashraf Khan, Sharda and that is where I started as a child artist – I was 7 years old then. My family had come under hard times and needed money, so I continued to work with all the big stars of the times. Later, I joined Kala Kendra and did some plays with some more famous people; following which I joined the Indian National Theatre. I worked with Praveen Joshi for 19 years and also married him. I did film thereafter, good ones like ‘Gangubai’ where I was felicitated in Washington and I received many honors from the Gujarat and Maharashtra governments. I have acted in movies and still do sometimes. On stage, I have worked with Satyadev Dubey, Ambrish Puri, and others.

Please tell us about your latest play with Zee Theatre ‘Saku Bai’ and your role.

Sakubai is typical of the maids of Mumbai where husbands and wives work. And now during lockdown people have realised how ‘Sakubai’ helped run the house and how important she is to a family. I have done ‘Jhalak’ in Gujarati which is a one-woman show. ‘Sakubai’ is my second one-woman show – I evolved as a woman in the show – from a child to a woman and to an older woman, a grandmother who laughs her troubles away. There are many Sakubais’ but within Sakubais there are special women who have an identity of their own. Zee should be complimented since teleplays are of great value now that there is a lockdown. ‘Sakubai’ is presented as a theatre specialty, her set is a stage set not a house, so she is shown as a theatre person.

Those of us who do theatre, we have a lot of confidence and also know a bit of technology. I have worked with directors like Praveen Joshi and Satyadev Dubey, who had a different styles of storytelling and hence I have learnt to act in my own natural way, whichever medium I am given. For television and films, the voice and throw have to be restricted while for the stage it has to be loud, so we learn to adapt with every different platform we work on.

Your thoughts on web series, which are the newest member of the entertainment world.

A: Web series have their good points as well as bad. Sometimes I think there is a bit too much violence and sex which need not be. Agreed, everyone has his creative license but there are other platforms for it because web series is usually watched at home. Entertainment should not necessarily make me laugh or cry but it should at least make sense. Take ‘Malgudi Days’, it is a piece of art, watching it gives the viewer peace of mind and one feels a sense of pride when watching it. If you want to show something realistic then make content related to murder mysteries and psychological thrillers – they are very interesting.

You’re a Sangeet Natak Akademi awardee as well as a Padma Shri recipient. How motivating are awards for you

We work with full honesty, hard work, and determination and we learn a lot from everything around. When my kids were small and my husband expired, that time theatre was like bread and butter for me. For me, acting is spiritual, honest, and my bread and butter; all these three things are very important for me and that is the reason I thought of earning through theatre. And whatever work I do, I give importance to money as well as my work – I’m very professional and work with utmost dedication. My awards came because of my approach and attitude to my work. For me, an award is equal to earning respect. I received the Padma Shri, because of the people. I never feel proud but feel happy and say Thank you God for making me reach such heights of success.

Do you think teleplays are a good OTT offering

During the pandemic, teleplays worked and they also work for senior citizens who can anyway not visit theatres. I feel bad when I see senior citizens visiting theatres on wheelchairs. The teleplay is a good initiative for days like the present when there is no other source of information.

As a veteran actor, what is your advice to younger actors

Hard work, honesty and punctuality, these three things should always be maintained in life because lethargy is something that will not work, and always remember that time is money. And whatever you do, keep society in mind, give something in return to society, keep a larger perspective in whatever you do.