The US Centers for Disease Control and Prevention (CDC) has changed its Covid-19 testing guidelines, which no longer recommends testing for most people without symptoms.

The new guidelines, updated earlier this week, asks people to get tested if they have coronavirus symptoms or have had close contact (within 6 feet of an infected person for at least 15 minutes), or have been asked or referred to get testing by their healthcare provider, local or state health department, reports Xinhua news agency.

“Not everyone needs to be tested,” said the new guidelines.

Previously, the CDC said viral testing was appropriate for people with recent or suspected exposure, even if they were asymptomatic.

The updated guidelines prompted concerns from some doctors and experts, who warned asymptomatic carriers play a major role in spreading Covid-19.

Testing and isolating those silent emitters are vital to containing the spread of the pandemic, experts said.

A resurgence of Covid-19 cases during the fall season in the US could drag the country’s economy into a double-dip recession, a senior Federal Reserve official said.

“An important risk to that outlook is thinking about what happens as we come into the fall, whether we see any resurgence in the virus that would cause an additional pullback in the economy,” Xinhua news agency quoted Esther George, president of the Federal Reserve Bank of Kansas City, as saying in a CNBC News interview on Wednesday.

“We’ll monitor that carefully to see whether that plays out,” she said.

George said that she expected the US economy to return to growth in the third and fourth quarters following a sharp contraction in the second quarter, but the recovery path forward will be determined by the pandemic.

“I think it’s too soon to try to speculate on whatever else might be needed, other than to say the Federal Reserve is going to be very vigilant on that and be prepared to respond if they would have to,” she said. 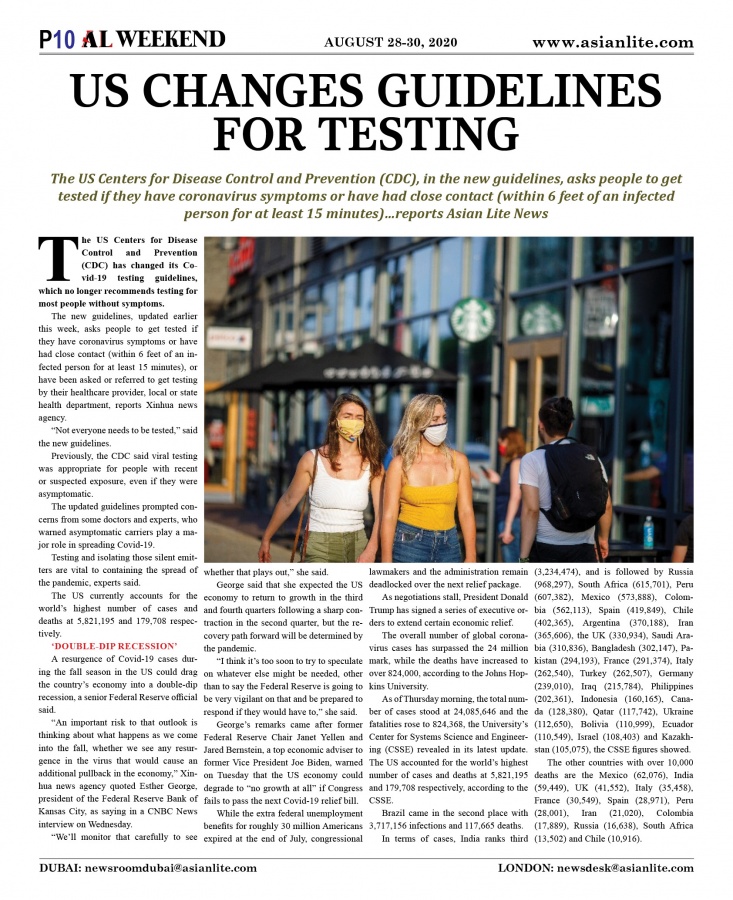 George’s remarks came after former Federal Reserve Chair Janet Yellen and Jared Bernstein, a top economic adviser to former Vice President Joe Biden, warned on Tuesday that the US economy could degrade to “no growth at all” if Congress fails to pass the next Covid-19 relief bill.

While the extra federal unemployment benefits for roughly 30 million Americans expired at the end of July, congressional lawmakers and the administration remain deadlocked over the next relief package.