The Chinese Communist Party (CCP) Chairman Xi Jinping’s call for an end to ‘food waste’ on August 11 is an indication that China is facing a shortage of food. This comes after the impact of the coronavirus, intense flooding across China, insect infestations, and outbreak of the African swine fever (ASF).

According to Xinhua, President Xi Jinping, described the problem as “shocking and distressing.” The scale of the problem is obviously alarming because this is the second time in two months that the Chinese President has given instructions on storing grains.

The chain of events since the outbreak of the coronavirus haveimpacted China and Xi Jinping is well aware of the fallout of such developments, based on past experience. That is why President Xi toured the countryside in Jilin Province. According to Beijing Reviewhe said: “The more risks and challenges we face, the more we need to stabilize agriculture and ensure the safety of grain and major non-staple foods.”

President Xi’s public remarks posted on CGTN, shows that he did not directly acknowledge a shortfall in food production, but described the coronavirus outbreak as the warning sign: “Though China has reaped a bumper grain harvest for years, it is still necessary to have the awareness of a food security crisis. The impact of the COVID-19 pandemic this year has sounded the alarm for us.” 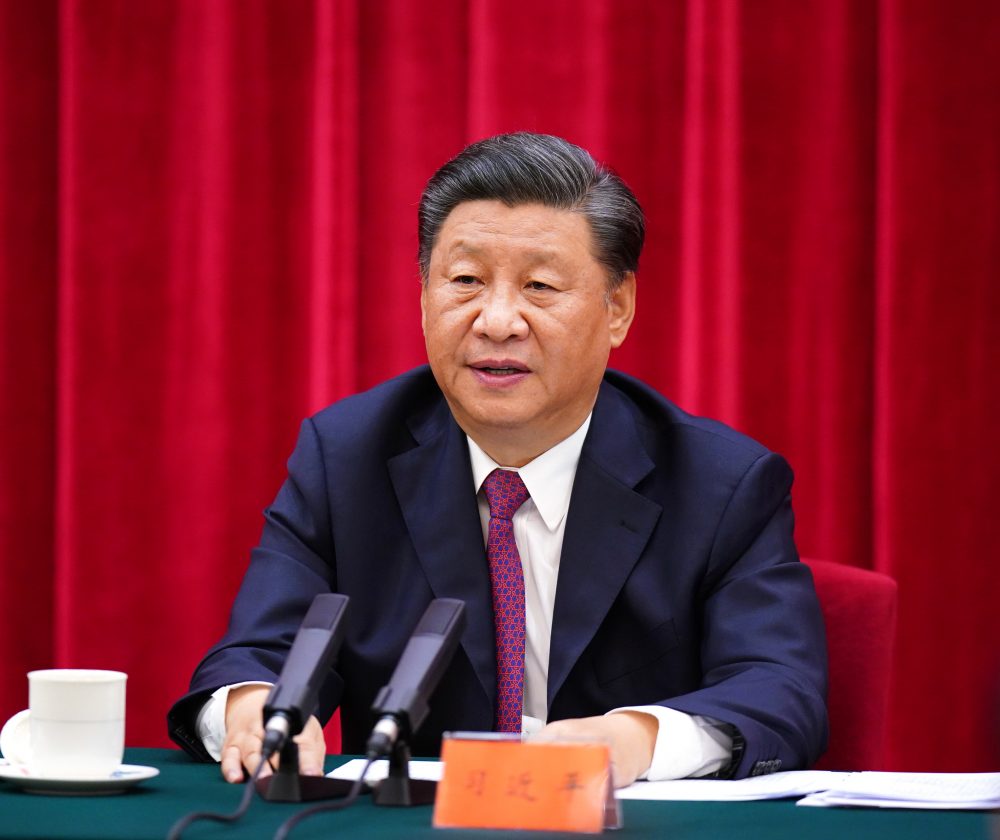 Official statistics show that China’s grain output has remained over 650 million tons for five consecutive years, and it reached about 660 million tons last year. China’s stockpiles of rice and wheat flour can last for over a year. China has a strategic food reserve system, wherein both the central governmentand provinces maintain their reserves.

China officially launched a new “Clean Your Plate Campaign” in August. Global Times reported that unlike the 2012 campaign which aimed at putting an end to officials’ extravagant feasts and receptions, this version calls on the Chinese public to stop wasting food.The article stated that speculation by some media on whether China was facing a food crisis was misplaced, the real challenge to food security was from wastage of food.

There have been reports to the effect that restaurants in China are restricting the amount or portion of food to be served to prevent food wastage. Normally, people in China share food family style. Chinese State media has openly criticised ‘binge eating’ and livestreaming platforms warned that they would ban users who wasted food on their broadcasts. The order from the top leader of the CCP that “China needs to maintain a crisis mentality for food security, especially after the COVID-19 pandemic,”has obviously been taken seriously in China. Food wastage in the past few years has been shocking, and some years agoit was reported that food wasted in China was enough to feed 200 million people a year.

According to a 2018 report by prepared the World Wildlife Fund and Chinese Academy of Sciences, restaurants and canteens alone in China wasted enough food annually to feed up to 50 million people. The Chinese State Council has since set up a Working Group to “educate and discipline” caters &diners to fight food waste. A new statute on food security and food management is being drafted as the National People’s Congress, China’s parliament, lays the legal groundwork to name, shame and even fine and jail squanderers.

The National Bureau of Statistics said food prices in China had climbed by about 10 per cent in July over the same period last year, while pork prices sky rocketed by 86 per cent. The latter can be attributed to the loss of 180 million pigs, or 40 per cent of the national herd, to ASF last year and fresh outbreaks this year following the floods. The price of corn is 20 percent higher and price of soybeans has gone up by 30 percent year-on-year.

Corn feeds China’s growing pig population, which is recovering from the ASF, a fatal disease that killed 40 percent of the country’s pig population in 2019. Another problem,which threatens China’s food supply, is insect infestations. Forbes reports that the fall armyworm, which feasts on corn, has been detected in all but five of China’s provinces, pushing corn prices to five-year highs, despite the release of 1.4 billion bushels of corn from the country’s reserves.

Assessments of China’s food crisis must also take into account other visible factors. In recent months, heavy flooding has inundated large areas of southern China and caused the 3,900-mile-long Yangtze River and its tributaries to rise to dangerous levels. While heavy rains are typical in the summer, this year’s rainfall has far exceeded the norm, causing the worst flooding of the Yangtze in four decades. 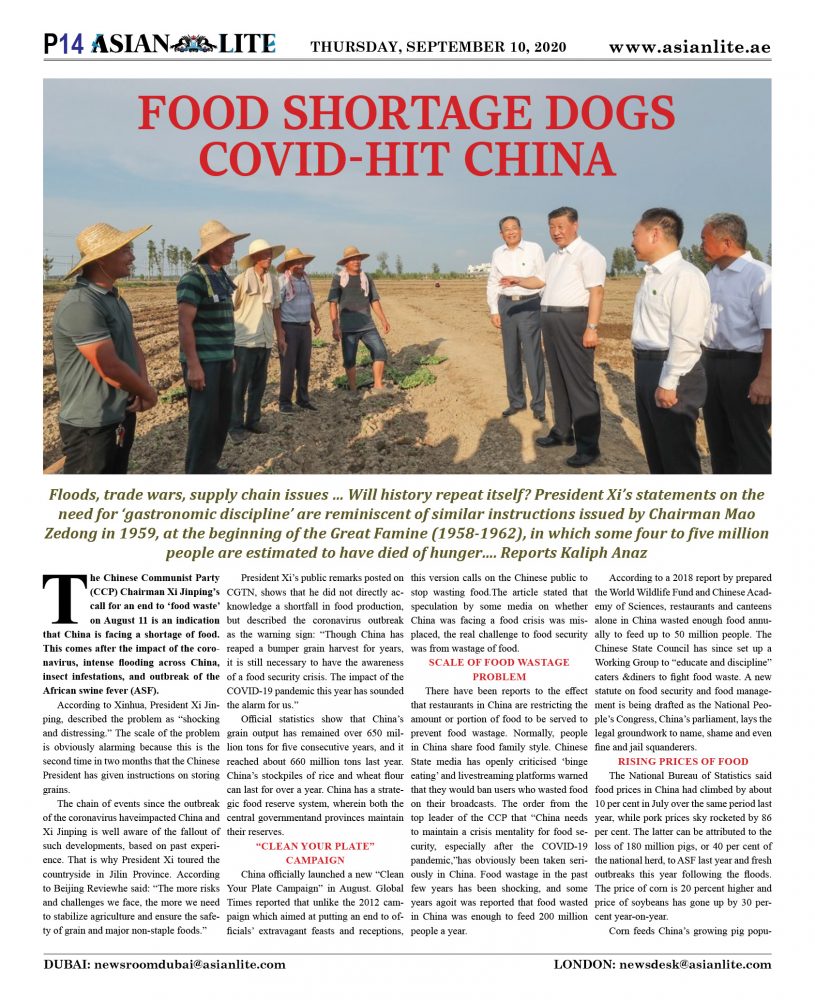 The flooding, which started in early June, continues in the Yangtze, Huai and Yellow River basins, which are all important grain-producing regions. The Yangtze River basin alone accounts for 70 percent of the China’s rice production.Flooding has hit twenty-seven Chinese provinces so far in this year, causing over 144 billion Chinese yuan in property damages.Floods have so far destroyed 13 million acres of farmland, affected 63 million people, and caused nearly US$26 billion in economic damage.It is estimatedthat China could lose 5 percent of its rice production compared to last year. Yet the total damage could be much worse, as heavy rainfall is expected to continue. The flooding is also affecting vital crops such as grain.

Significantly, pictures showed floodwaters rising over the toes of the Leshan Giant Buddha in southwestern Sichuan province, for the first time since 1949. China’s Ministry of Water Resources claims that water inflows to the Three Gorges Dam are expected to reach its highest levels since the dam started holding water in 2003.

While food wastage is a real problem, underlying this crisis is the decrease in domestic food grain purchase, combined with a dramatic increase in imports of food grains and other items by China. Notably, a day after President Xi gave out his instructions, China’s National Food and Strategic Reserves administration announced that its purchases of wheat had dropped by nearly 10 million tons from last year. As of 5 August, purchases of wheat had reached 42.86 million tons, a year-on-year drop of 9.38 million tons. Purchases of rapeseed reached 706,000 tons, a drop of 51,000 tons over the same period last year. However, purchases of rice had reached 2.64 million tons, a year-on-year increase of 126,000 tons.

Another major threat to China’s crops is the hordes of locusts, which have attacked crops all over Asia this year. On 31 July 2020, China’s Ministry of Agriculture and Rural Affairs ordered the spraying of pesticide and deployment of drones to fight off the insects, which it reported had damaged about 90 square kms of cropland over the past month in the Yunnan Province. 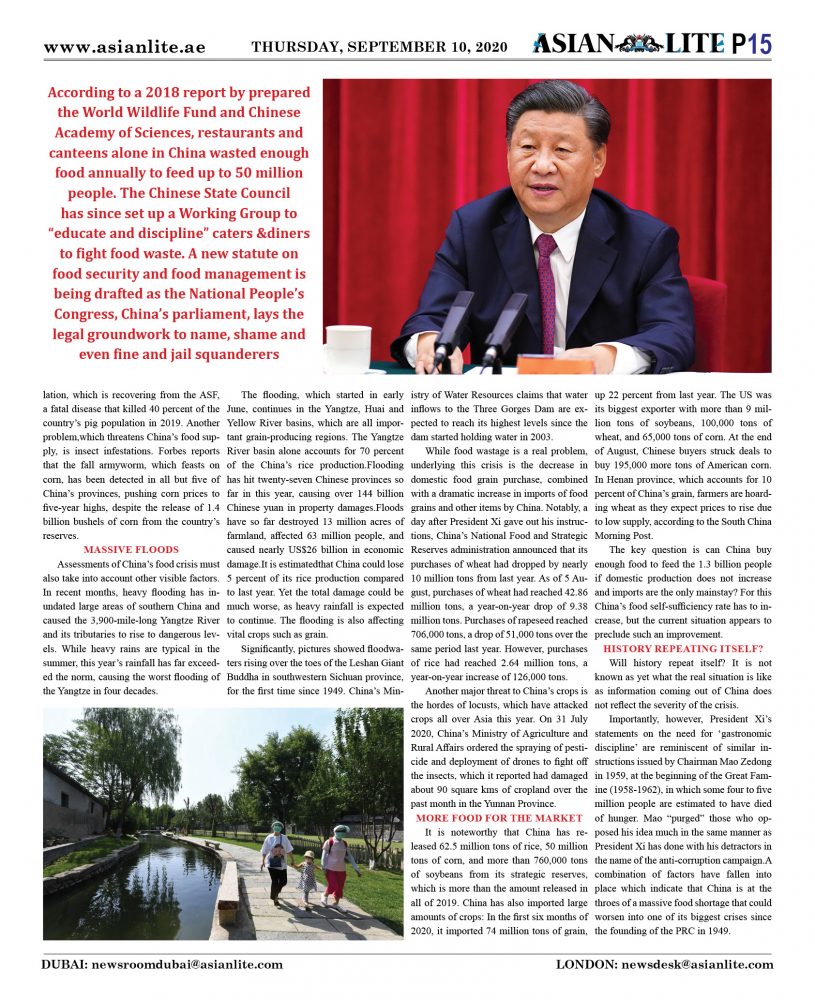 More food for the market

It is noteworthy that China has released 62.5 million tons of rice, 50 million tons of corn, and more than 760,000 tons of soybeans from its strategic reserves, which is more than the amount released in all of 2019. China has also imported large amounts of crops: In the first six months of 2020, it imported 74 million tons of grain, up 22 percent from last year. The US was its biggest exporter with more than 9 million tons of soybeans, 100,000 tons of wheat, and 65,000 tons of corn. At the end of August, Chinese buyers struck deals to buy 195,000 more tons of American corn.In Henan province, which accounts for 10 percent of China’s grain, farmers are hoarding wheat as they expect prices to rise due to low supply, according to the South China Morning Post.The key question is can China buy enough food to feed the 1.3 billion people if domestic production does not increase and imports are the only mainstay? For this China’s food self-sufficiency rate has to increase, but the current situation appears to preclude such an improvement.

Will history repeat itself? It is not known as yet what the real situation is like as information coming out of China does not reflect the severity of the crisis. Importantly, however, President Xi’s statements on the need for ‘gastronomic discipline’ are reminiscent of similar instructions issued by Chairman Mao Zedong in 1959, at the beginning of the Great Famine (1958-1962), in which some four to five million people are estimated to have died of hunger. Mao “purged” those who opposed his idea much in the same manner as President Xi has done with his detractors in the name of the anti-corruption campaign.A combination of factors have fallen into place which indicate that China is at the throes of a massive food shortage that could worsen into one of its biggest crises since the founding of the PRC in 1949.