A Kenyan food import company, Magnum Africa, operating from Nairobi has rekindled hopes at the headquarters of India’s external Intelligence agency — RAW — of locating one of the most sought after fugitives, Tiger Memon, the mastermind of 1993 Mumbai serial blasts, which killed 257 people in one of the worst ever terror attacks in the subcontinent.

For the past five years, the elusive Tiger Memon involved in drug trafficking, has been literally off the radar of Intel agencies.

Tracking Magnum Africa’s dealings in Pakistan has disclosed that under the garb of trade in grains the company was involved in an international drug trafficking racket. On paper, Magnum imported high quality rice and other grains from Pakistan but its real deals were related to narcotics.

Moosa, an accused in serial blasts, is considered Tiger Memon’s right hand man. Moosa was arrested at the Mumbai airport while he was on his way to Dubai from Nairobi. Moosa’s subsequent interrogation shed light on Tiger Memon’s whereabouts.

The Intelligence dossier on the ‘Tiger of Terror’ says the 59-year-old Memon sought help from underworld don Dawood Ibrahim to execute serial bomb blasts in Mumbai.

“We have enough evidence against Dawood Ibrahim’s presence in Karachi, but we have little information to go on in Tiger Memon’s case, who is the prime accused…, ” says Ujjwal Nikam, the chief prosecutor of the serial blasts.

Last time when police traced Tiger Memon, it was in July 2015. Tiger had called his mother in Mumbai, hours before his younger brother Yakub was hanged for his role in the Mumbai serial blasts.

In the three minute telephonic conversation with his mother, Tiger had vowed to avenge the hanging of Yakub. Since then Tiger has not been heard of.

“We have sent several Interpol notices to Pakistan to track and arrest Tiger Memon. But there was not even a whisper from the other side. On our files, Tiger, the mastermind of the serial blasts, is an absconder.

“Though the trial has ended, we still await his arrest. The moment he is caught, a fresh charge sheet would be filed on the basis of the evidence already placed before the court,” said Nikam, special public prosecutor in several leading terror cases, including the Mumbai bombings. 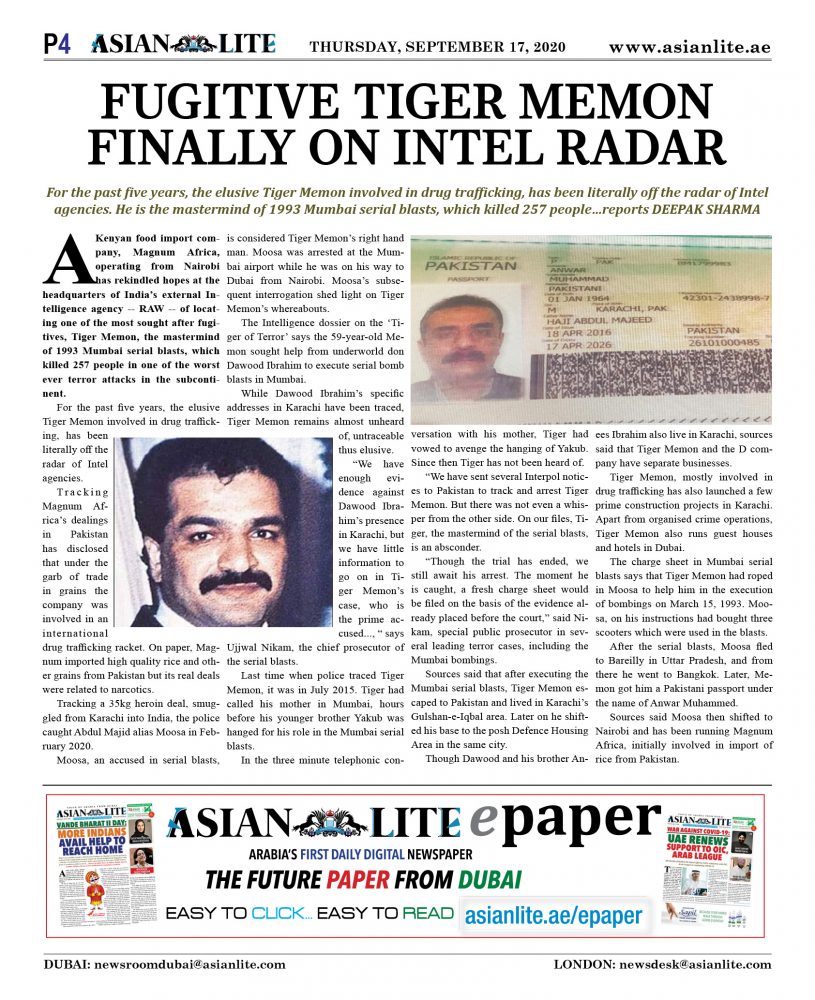 Sources said that after executing the Mumbai serial blasts, Tiger Memon escaped to Pakistan and lived in Karachi’s Gulshan-e-Iqbal area. Later on he shifted his base to the posh Defence Housing Area in the same city. Though Dawood and his brother Anees Ibrahim also live in Karachi, sources said that Tiger Memon and the D company have separate businesses.

The charge sheet in Mumbai serial blasts says that Tiger Memon had roped in Moosa to help him in the execution of bombings on March 15, 1993. Moosa, on his instructions had bought three scooters which were used in the blasts.

After the serial blasts, Moosa fled to Bareilly in Uttar Pradesh, and from there he went to Bangkok. Later, Memon got him a Pakistani passport under the name of Anwar Muhammed.

Sources said Moosa then shifted to Nairobi and has been running Magnum Africa, initially involved in import of rice from Pakistan.