Amid the tensions between India and China along the Line of Actual Control (LAC) in eastern Ladakh, HAL’s indigenous Light Utility Helicopter (LUH) has demonstrated its high-altitude capability in hot and high weather conditions in the Himalayas for around 10 days, the HAL said.

The state-owned Hindustan Aeronautics Limited (HAL) said in a release that a comprehensive test plan was executed at Leh, 3,300 metres above sea level, or MAMSL, in temperatures up to International Standard Atmosphere +320C, which included envelope expansion, performance, and flying qualities.

The LUH took off from Leh and demonstrated its hot and high hover performance at Daulat Beg Oldie (DBO) Advanced Landing Ground (ALG) at 5,000 MAMSL.

“The helicopter also demonstrated its payload capability in the Siachen Glacier’s high altitude. During the trials, pilots landed the helicopter at the highest helipads of Amar and Sonam,” the release added.

HAL Chairman and Managing Director (CMD) R Madhavan said that the HAL has once again proved its indigenous capability in design and development.

“The Army version of LUH is now ready for Initial Operational Clearance,” the release quoted him.

HAL Director-Engineering and Rotary and Development, Arup Chatterjee said that the performance of the helicopter and its systems are “satisfactory”, fulfilling the requirements of the end-users.

“All planned tests were successfully demonstrated,” he said. 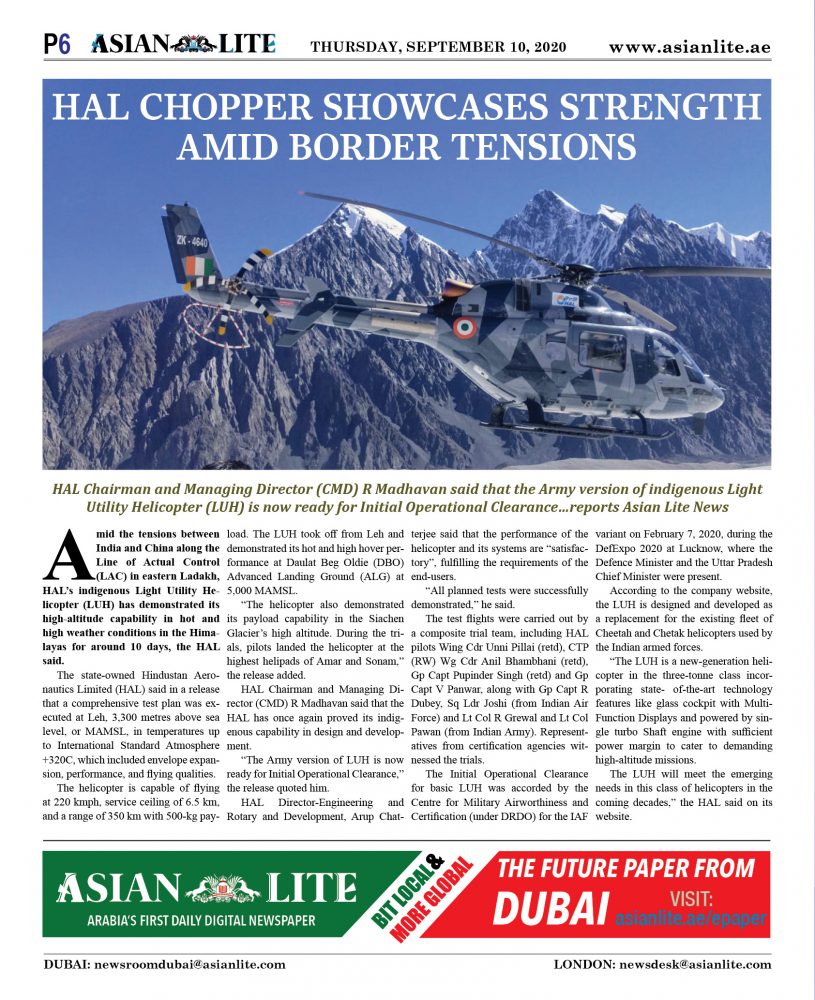 The Initial Operational Clearance for basic LUH was accorded by the Centre for Military Airworthiness and Certification (under DRDO) for the IAF variant on February 7, 2020, during the DefExpo 2020 at Lucknow, where the Defence Minister and the Uttar Pradesh Chief Minister were present.

According to the company website, the LUH is designed and developed as a replacement for the existing fleet of Cheetah and Chetak helicopters used by the Indian armed forces.

“The LUH is a new-generation helicopter in the three-tonne class incorporating state- of-the-art technology features like glass cockpit with Multi-Function Displays and powered by single turbo Shaft engine with sufficient power margin to cater to demanding high-altitude missions. The LUH will meet the emerging needs in this class of helicopters in the coming decades,” the HAL said on its website.