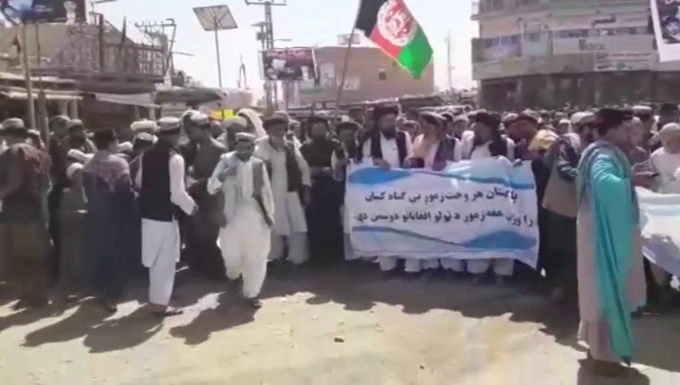 Hundreds of Afghans staged a protest in Spin Boldak district to condemn last week’s deadly incident at Chaman crossing between Afghanistan and Pakistan.

On July 31, at least nine civilians were killed and 50 others were wounded in Pakistani forces artillery attacks on “residential areas” in Spin Boldak district, Kandahar province, the Afghan Defense Ministry said at the time.

The protesters who were chanting anti-Pakistan slogans advocared giving a well-measured response if the Pakistani forces resort to a similar action in the future.

The Afghan Ministry of Foreign Affairs in a statement rejected Pakistan’s claim that it was attacked from Afghan soil across the Durand Line last week and said Afghans are the victims of terrorism and will never allow any terror group to stage attacks from its soil.

According to the Ministry of Foreign Affairs, a meeting was also held between Afghan and Pakistani officials on Thursday to help prevent such incidents in the future.

The members of the negotiation team and some delegates of the Loya Jirga, the grand assembly, called on the Taliban to show flexibility in the peace process as hopes increase for the start of intra-Afghan negotiations if the prisoner release is completed.

The Taliban so far has not released a statement on their willingness to begin the talks within three days after the completion of the prisoner release.

The Jirga, with almost 3,200 delegates, has agreed to release about 400 Taliban prisoners who, according to the government, are accused of serious crimes.

“We are more ready, and more issues were discussed. Talks require flexibility and both sides should show flexibility, but basic principles and the values of the Afghan people are the issues that are not negotiable and cannot be compromised from our side,” said Fawzia Kofi, member of the negotiation team of the Islamic Republic of Afghanistan.

Abdullah Abdullah, head of the High Council for National Reconciliation, who also chairs the Loya Jirga, said the first round of the intra-Afghan negotiations will be held in Doha, if the prisoner release is completed.

“It seems that the people do not have any problem in releasing the prisoners, but they want a nationwide and reliable peace,” said Amir Mohammad Akhondzada, former governor of Helmand.

A former Taliban member, Sayed Akbar Agha, said “intra-Afghan talks need time and it must be clear about who are the nation’s representatives and who are not.”

“The two sides should start the intra-Afghan negotiations sharply after the release of the 400 prisoners,” said Shaida Mohammad Abdali, Afghanistan’s former ambassador to India. 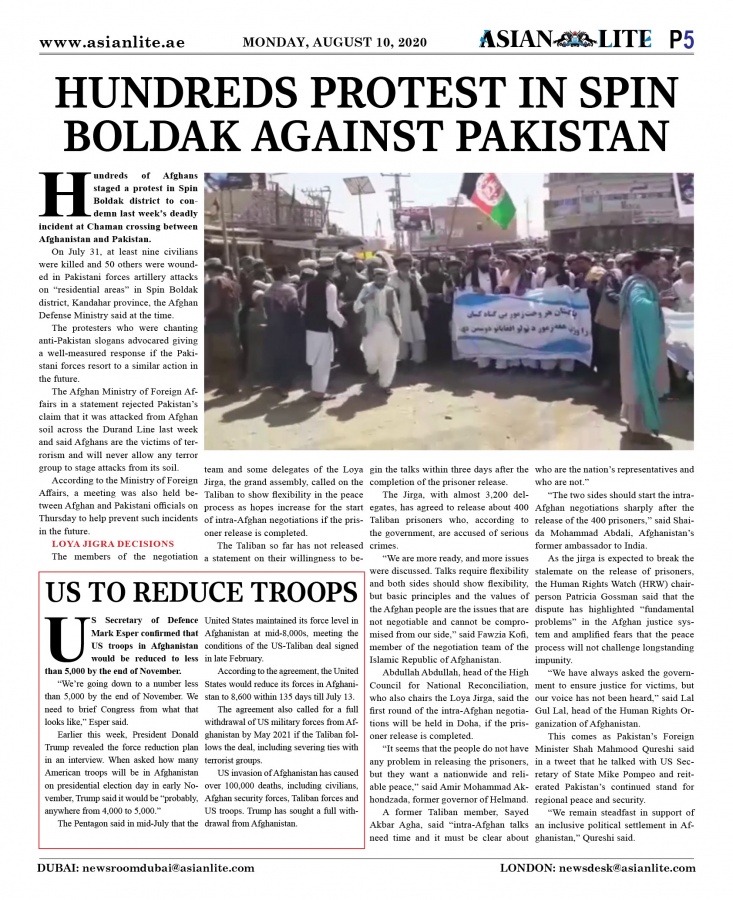 As the jirga is expected to break the stalemate on the release of prisoners, the Human Rights Watch (HRW) chairperson Patricia Gossman said that the dispute has highlighted “fundamental problems” in the Afghan justice system and amplified fears that the peace process will not challenge longstanding impunity.

“We have always asked the government to ensure justice for victims, but our voice has not been heard,” said Lal Gul Lal, head of the Human Rights Organization of Afghanistan.

This comes as Pakistan’s Foreign Minister Shah Mahmood Qureshi said in a tweet that he talked with US Secretary of State Mike Pompeo and reiterated Pakistan’s continued stand for regional peace and security.

“We remain steadfast in support of an inclusive political settlement in Afghanistan,” Qureshi said.