Prime Minister Narendra Modi unfurled the Tricolour at the Red Fort and addressed the nation amid Covid-19 induced new norms after paying tribute at the Raj Ghat on the occasion of 74th Independence Day.

Continuing the tradition of sporting bright-coloured turbans for his Independence Day speeches, the Prime Minister chose an off-white saafa with broad streak of orange for the second I-Day address of his second term.

Modi also extended greetings to the people of the nation. “Happy Independence Day to all fellow Indians. Jai Hind!” tweeted Modi from his official Twitter account.

The Independence Day function, this year, is relatively muted in terms of participation of people in view of the Coronavirus pandemic.

The GoC then conducted the Saluting Base in the presence of the Prime Minister, where a combined Inter-Services and Police Guards presented the general salute to him. Thereafter, Modi inspected the Guard of Honour. 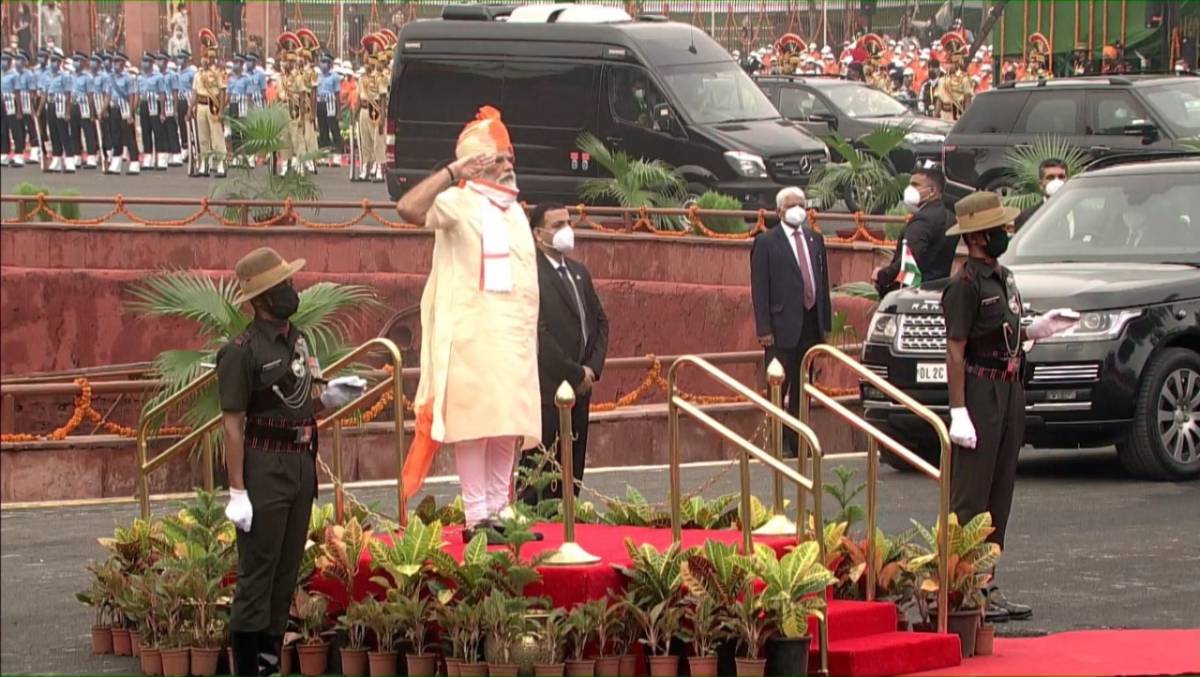 He then proceeded to the ramparts of the Red Fort where he was greeted by Rajnath Singh, Chief of Defence Staff General Bipin Rawat, Chief of Army Staff General M.M. Naravane, Chief of Naval Staff Admiral Karambir Singh and Chief of Air Staff Air Chief Marshal R.K.S. Bhadauria.

On unfurling the National Flag by Modi, the National Guard performed the ‘Rashtriya Salute’ as the Army Grenadiers Regimental Centre Military Band played the National Anthem.

Major Shweta Pandey assisted the Prime Minister in unfurling of the Tricolour that was synchronized with the 21 Gun Salute fired by the valiant gunners of the elite 2233 Field Battery (Ceremonial). The National Flag Guard comprising 32 men and one officer each from the Army, Navy, Air Force and Delhi Police who presented the Rashtriya Salute.

In the backdrop of recent Galwan Valley clash between Indian-Chinese soldiers, Modi said the respect for India’s sovereignty is supreme and Indian Army has responded from the LOC to the LAC whoever raised an eye on the sovereignty of the country.

Showing respect to the exemplary courage of Indian soldiers during the face-offs between the troops of the two countries in May-June this year in the Galwan Valley in eastern Ladakh, the Prime Minister said Indian Army has responded in the same language. 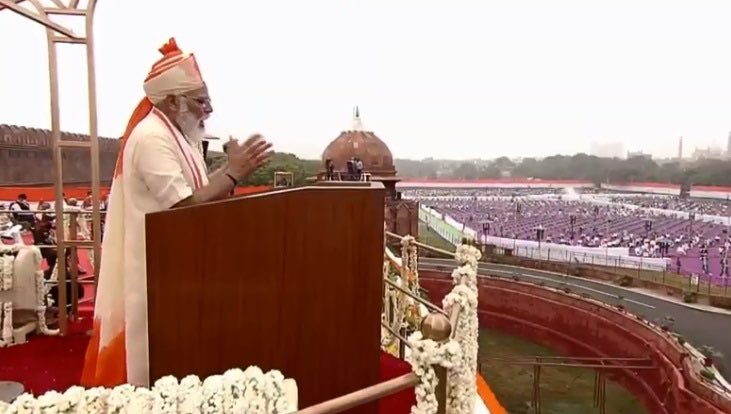 “Respect for India’s sovereignty is supreme for us. What our brave soldiers can do for this resolution, what the country can do, the world has seen in Ladakh,” Modi said referring to a violent clash in the Galwan Valley on June 15 in which as many as 20 Indian soldiers and an unknown number of Chinese People’s Liberation Army (PLA) were killed.

In his around 90-minute marathon speech, the Prime Minister said whoever has raised an eye on the sovereignty of the country, India and its Army has responded in the same language from the Line of Control (LoC) to the Line of Actual Control (LAC).

Modi said India is connecting its relations with its neighbours, whether they are connected to it on land or from the sea, with the partnership of security, development and trust.

Noting that one-fourth of the world’s population lives in South Asia, the Prime Minister said we can create untold possibilities of development and prosperity of such a large population with cooperation and participation.

“All the leaders of the countries of this region have an important responsibility towards the development and progress of this huge mass group.”

As much as India’s efforts are for peace and harmony, Modi said the more commitment it has for its security and to make its Army stronger.

“India is also fully equipped for self-sufficiency in defence production,” he added.