The security agencies are on high alert as the banned Sikhs For Justice (SFJ) is learnt to have announced a $125,000 reward for anyone who hoists a Khalistan flag at the Red Fort on Independence Day on August 15.

Delhi Police, the nodal agency for law and order in the national capital, was busy coordinating with different security establishments ahead of Independence Day when it was alerted to the SFJ offer.

Over 45,000 security personnel will guard every nook and corner of the city on Independence Day, besides over 2,000 snipers deputed at specific locations on high-rise buildings in the 5-km periphery around the Red Fort.

Security agencies have meanwhile assured that it is “just an attempt by the SFJ to create panic”. Senior Delhi Police officers connected with making the security arrangements said any suspected person will be taken into custody and that it is “impossible” to breach the security cordon on Independence Day.

Declaring that August 15 is not Independence Day for the Sikhs, the SFJ leader reminded the community that “1947 was just a swapping of rulers for them as the Indian Constitution labels the Sikhs as Hindus; a genocide of Sikhs was committed with impunity (1984) and natural resources of Punjab are being unjustly appropriated.”

Indian security agencies have already asked these Embassies to be on alert.

Besides, the SFJ, banned by the Ministry of Home Affairs in July 2019 for advocating ‘Referendum 2020’, has chosen Punjab, Delhi, and Jammu and Kashmir since July 4 to launch its online voter registration for ‘Referendum 2020’ through different portals but reportedly could not gather support.

The group has used Canadian cyberspace twice for launching its voter registration for the referendum in Delhi and Jammu and Kashmir on the instructions of Pannun, who is among the nine pro-Khalistan activists designated terrorists by the Indian government last month.

US-based Pannun has been playing a major role in the ‘Referendum 2020’ campaign. His US-based radical Khalistan outfit has urged the Sikhs in India and abroad to support its agenda of ‘Referendum 2020’, which is being promoted by the group to divide India on communal lines. 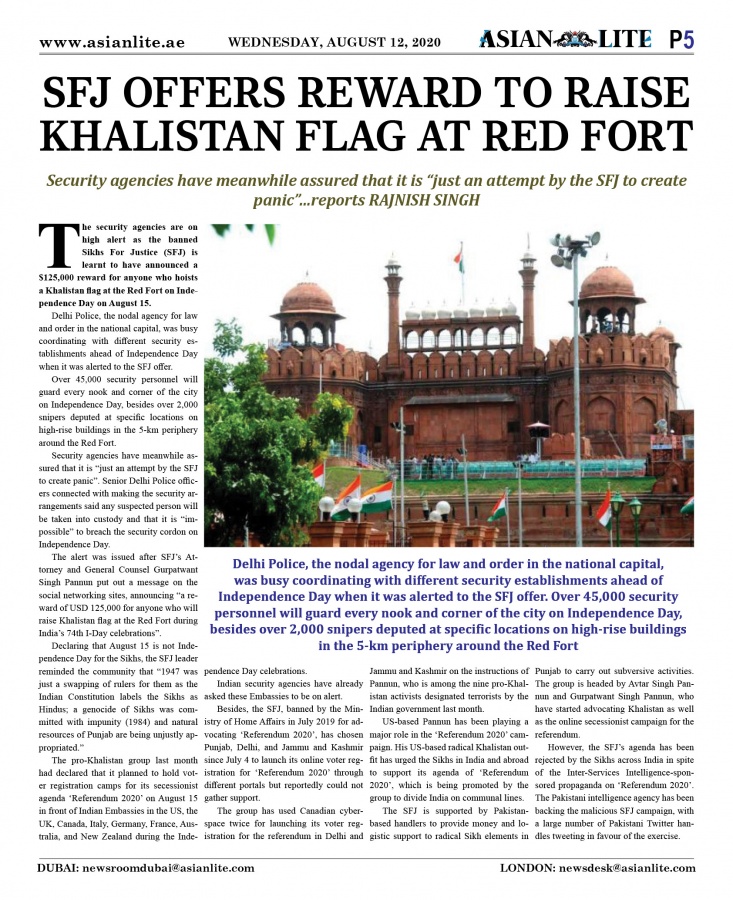 The SFJ is supported by Pakistan-based handlers to provide money and logistic support to radical Sikh elements in Punjab to carry out subversive activities. The group is headed by Avtar Singh Pannun and Gurpatwant Singh Pannun, who have started advocating Khalistan as well as the online secessionist campaign for the referendum.

However, the SFJ’s agenda has been rejected by the Sikhs across India in spite of the Inter-Services Intelligence-sponsored propaganda on ‘Referendum 2020’. The Pakistani intelligence agency has been backing the malicious SFJ campaign, with a large number of Pakistani Twitter handles tweeting in favour of the exercise.