Palestine has slammed the US-brokered historic peace agreement between the United Arab Emirates (UAE) and Israel for full normalisation of relations between the two countries.

Hours after the development on Thursday, the Palestinian presidency described the agreement as “disgraceful”, considering it a “blow to the Arab Peace Initiative and the decisions of the Arab and Islamic summits, and an aggression against the Palestinian people”, reports Xinhua news agency.

The presidency recalled its Ambassador to Abu Dhabi over the move.

In a televised statement following an urgent leadership meeting chaired by Palestinian President Mahmoud Abbas, the presidency said it rejected linking the suspension of the Israeli annexation plan to any normalization of relations between Israel with the UAE or any other nation.

It warned the rest of the Arab countries against “bowing” to US pressure and following in the footsteps of the UAE, saying it provides “free normalization with the Israeli occupation at the expense of Palestinian rights”.

“The Palestinian leadership rejects what the UAE has done and considers it a betrayal of Jerusalem, the Al-Aqsa Mosque and the Palestinian cause.

“This deal is a de facto recognition of Jerusalem as the capital of Israel,” said Abbas’s spokesperson Nabil Abu Rudeineh.

Member of the Palestine Liberation Organization (PLO) Executive Committee Hanan Ashrawi said the UAE has come forward with its “secret dealings/normalization with Israel”.

“Israel got rewarded for not declaring openly what it has been doing to Palestine illegally and persistently since the beginning of the occupation,” Ashrawi tweeted.

“Please don’t do us a favour. We are nobody’s fig leaf.”

Meanwhile, Hazem Qassem, spokesperson for the Islamic Hamas movement in Gaza Strip, said that it condemned the agreement because it “encourages the occupation to continue its denial of the rights of our Palestinian people”.

“What happened today between the Emirates and Israel is precisely the weakening of the ability of resistance and confrontation,” he said.

The Islamic Jihad Movement in Gaza said that the deal is considered “surrender and submission,” but it would “not change the facts of the conflict, but rather allow the occupation to persist”.

Other factions, including the Popular Front for the Liberation of Palestine, The Palestinian People’s Party, the Palestinian Struggle Front issued condemnation statements.

Relations between Palestine and the UAE have been strained in recent years, but tensions between the two sides peaked after a UAE plane landed at Israeli Ben Gurion airport carrying medical supplies for Palestinians, which the Palestinian government rejected.

Trump posted a statement on Twitter which said: “The historic diplomatic breakthrough will advance peace in the Middle East region and is a testament to the bold diplomacy and vision of the three leaders and the courage of UAE and Israel to chart a new path that will unlock the great potential in the region.

“All three countries face many common challenges and will mutually benefit from today’s historic achievement.” 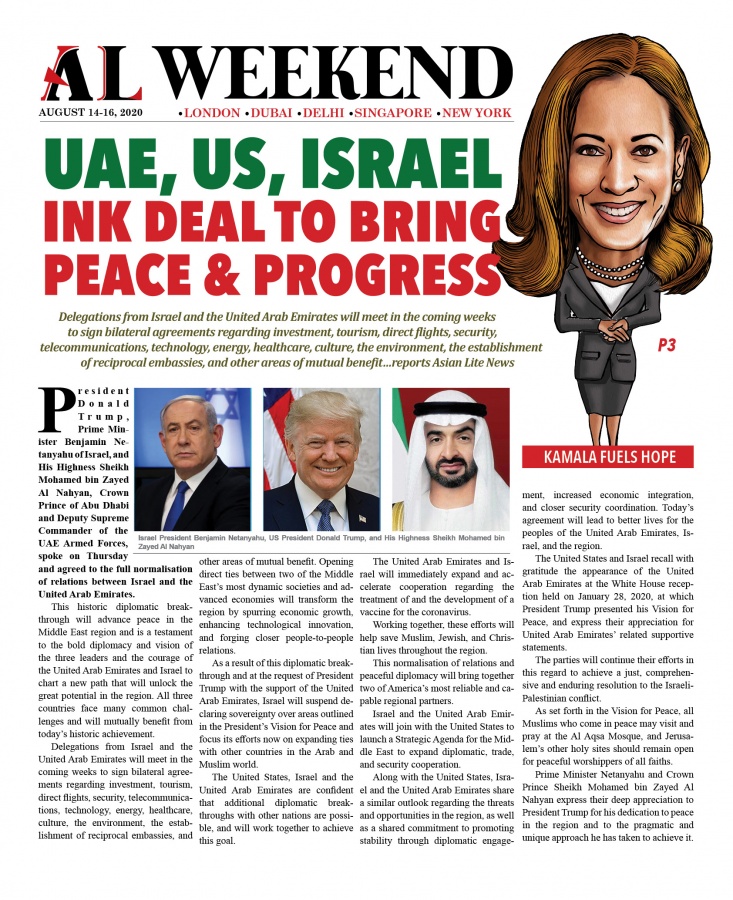 As part of the agreement, Israel will suspend declaring sovereignty over areas outlined in Trump’s vision of peace and focus its efforts now on expanding its ties with other countries in the Arab and Muslim world.

The UAE and Israel will also immediately expand and accelerate cooperation regarding the treatment of and the development of a vaccine for coronavirus.

According to reports, this is the first peace treaty between Israel and an Arab country in 25 years.