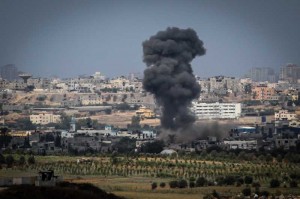 Witnesses said that F16 fighter jets had intensively hovered over the Hamas-ruled coastal enclave, while several explosions were heard in southern and central Gaza Strip.

Security officials confirmed that around four airstrikes were carried out on the facilities in the southern Gaza Strip towns of Rafah and Khan Younis and also on central and northern Gaza Strip.

Medical sources said that no injuries were reported, but slight damages were caused to nearby houses.

It is the first intensive Israeli airstrikes on the Gaza Strip since the end of last summer’s large-scale military air and ground operation Israel waged on the territory for 50-days, leaving more than 2,145 Palestinians killed.

The airstrikes on the training facilities, which belong to Hamas and Islamic Jihad, were an Israeli act of retaliation for earlier rockets attacks carried out overnight from northern Gaza Strip into Israel.

Ismail Radwan, a senior Hamas leader in Gaza told Xinhua that his movement is not aware of firing any rockets from Gaza into southern Israel, adding “the Palestinian factions are committed to the ceasefire agreement.”

Meanwhile, Khader Habib, a senior Islamic Jihad leader in Gaza, also told Xinhua that his movement is not responsible for firing any rockets into Israel.