It began six years ago when Kaninika Mishra, with a bachelors degrees in homoeopathic medicine and arts, as well as a masters degree in management from an Australian university, started to formally learn yogic workouts and met many young people who had turned to yoga, Ayurveda or Indian dietary regimens to cope with stress and health problems of modern living.

“Around that time, the market for Ayurveda personal care products and Khadi had also begun on its path of exponential growth. This struck me as a significant change from only a decade ago when yoga was considered suitable for the elderly and urban Indians were fascinated with foreign products. I began researching this trend. I found several start-up founders and activists who were passionate about Indian heritage and were working hard to bring forward Indic wisdom from the past to benefit contemporary society,” and was inspired to write a book, “The Indic Quotient” that has been published by Bloomsbury India.

Her research was three-fold. “One aspect was understanding aspects of Indic culture relevant to my book such as the philosophy and historical perspectives related to yoga, Ayurveda, textiles, literature and Indic art. The second aspect was tracking and analysing the entrepreneurial activity in the heritage sector through news reports. The third involved travelling and meeting people across India,” Mishra, who was born in Jamnagar, grew up in different parts of India and now heads the learning and development department for a communications firm in Gurugram, told in an interview.

She travelled for four years and interviewed people in diverse fields, ranging from temple conservation to beauty products and from yoga schools to digital initiatives in Ayurveda practice. She sought out initiatives which she felt made an impact and made it a point to interact with people along the entire supply chain.

“For instance, while I visited the office of an Ayurveda beauty brand in Gurgaon (Gurugram), and interviewed the CEO and other staff, I also traced my way back to the remote village in Uttarakhand and spoke to the woman farmer who supplied Amla (Indian Gooseberry) that went into the company’s products.

“I met the Chief Strategy Officer of Patanjali at their campus in Haridwar but also followed their longest distribution link to faraway Arunachal Pradesh, where I interviewed the shopkeeper at a Patanjali store in Itanagar,” Mishra explained.

While she corresponded on email and telephone with the founders of the India Pride Project who are based in Singapore and are working towards repatriation of smuggled temple idols from museums aboard, “at the same time I ensured I made my way to the temple in a small town in central Tamil Nadu which had been the target of such a theft several years ago”, she said.

There are also stories of a team of economists in Delhi working to put long-forgotten millets on urban Indian plates, a yoga teacher from rural Bihar setting up a successful teaching practice in Gurugram, a former engineer working to revive traditional textiles in Assam and a corporate professional in Bengaluru making India’s first Sanskrit animation film.

What is Mishra’s take on the resurgence of traditional wisdom and culture in modern India, and what this means for India’s economic future and soft power?

Noting that our ancient traditions have sustained for several millennia and have been even incorporated into the daily lives of people, she added: “Most Indians use home remedies and beauty regimens based on the Ayurveda principles, but I observe a new enthusiasm about our culture and history.”

“In my view, the resurgence we see now is a result of economic growth and new-found confidence in our identity. Also, with the rise in nuclear families, the knowledge may no longer be available at home and consumers are seeking them from commercial enterprises who have packaged it and made it easy to use,” Mishra elaborated.

To this end, entrepreneurs are stepping in to fulfil the demand spurring great economic activity in this sector. Also, the traditional emphasis on organic agriculture, indigenous grains, handmade products etc “fits well in the prevailing global discourse on health, wellness and sustainability and therefore India easily takes the position of a leader in discussions on holistic health, environment-friendly practices and nature-based products helping its soft power outreach tremendously,” she maintained. 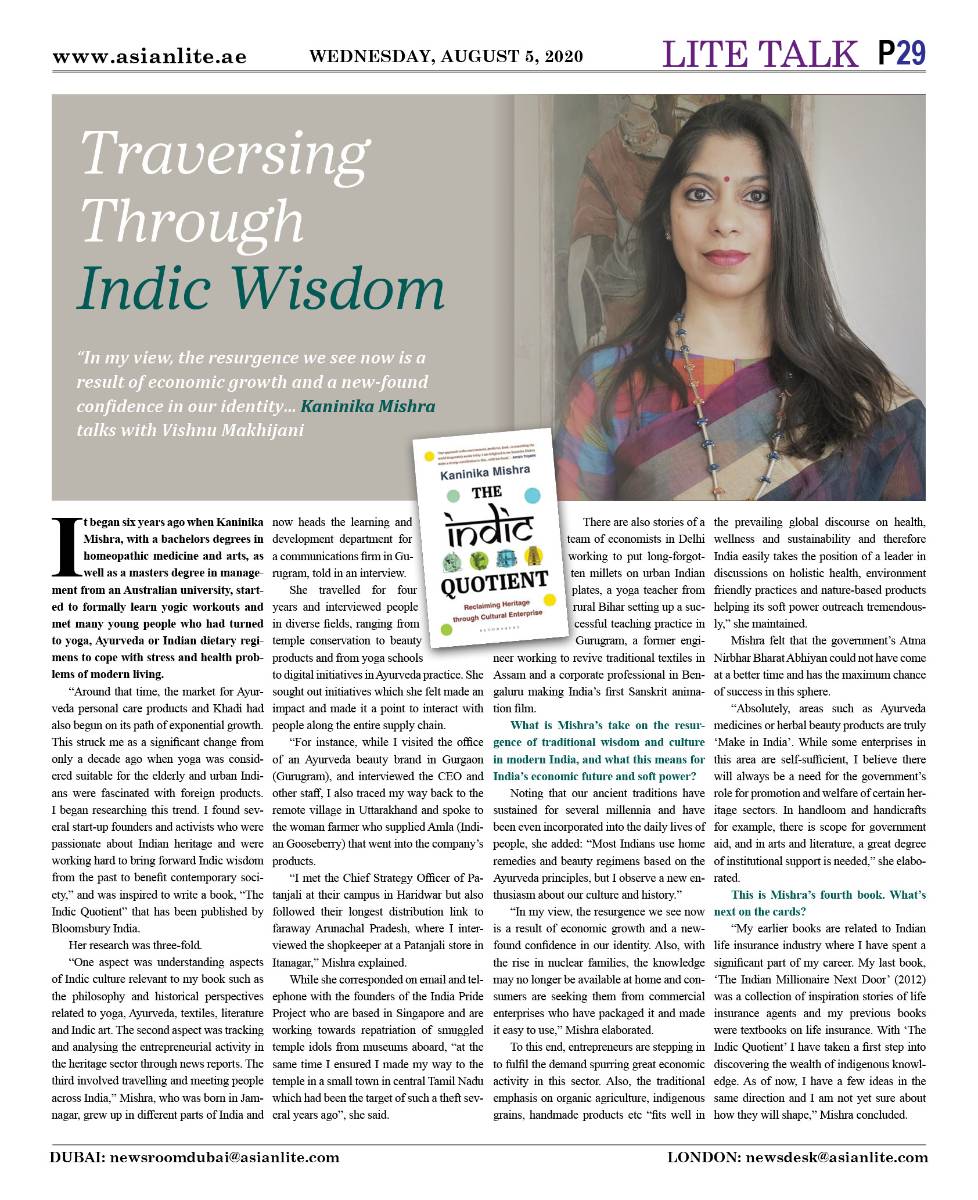 Mishra felt that the government’s Atma Nirbhar Bharat Abhiyan could not have come at a better time and has the maximum chance of success in this sphere.

“Absolutely, areas such as Ayurveda medicines or herbal beauty products are truly ‘Make in India’. While some enterprises in this area are self-sufficient, I believe there will always be a need for the government’s role for promotion and welfare of certain heritage sectors. In handloom and handicrafts for example, there is scope for government aid, and in arts and literature, a great degree of institutional support is needed,” she elaborated.

This is Mishra’s fourth book. What’s next on the cards?

“My earlier books are related to Indian life insurance industry where I have spent a significant part of my career. My last book, ‘The Indian Millionaire Next Door’ (2012) was a collection of inspiration stories of life insurance agents and my previous books were textbooks on life insurance. With ‘The Indic Quotient’ I have taken a first step into discovering the wealth of indigenous knowledge. As of now, I have a few ideas in the same direction and I am not yet sure about how they will shape,” Mishra concluded.