A bellicose and rather desperate Pakistan wanting to ratchet up the volume over Kashmir tried a spanking new manoeuvre. The Organisation of Islamic Cooperation wary of Pakistan’s antics is refusing to hold a foreign ministers meeting on Kashmir. A troubled Pakistan however, is unwilling to listen and is looking to appeal to the Islamic Umma and hold a confabulation of its own.

A panicky Pakistan realising that it is losing the momentum on Kashmir has been literally pushing the 57-member organisation, which is the second largest intergovernmental body after the UN, for the foreign ministers’ meeting since India revoked the special status of Jammu and Kashmir last August.

In a television interview foreign minister, Shah Mehmood Qureshi said that if OIC cannot call for such a meeting then he would ask PM Imran Khan to give a clarion call to the Islamic conclave. OIC bloc heavy hitter Saudi Arabia has been remaining steadfast on not going ahead with a meeting specifically on Kashmir.

In a virtual meeting of the OIC Contact Group on Jammu and Kashmir held as recently on the request of Pakistan on June 22, Qureshi had asked the Islamic bloc to expedite its efforts to resolve the Kashmir issue.

The reluctance of OIC to convene the conference, prompting an upset Islamabad to threaten that it may call a separate gathering on the issue.

“I am once again respectfully telling OIC that a meeting of the Council of Foreign Ministers is our expectation,” Qureshi said during a talk show on ARY News on Wednesday. 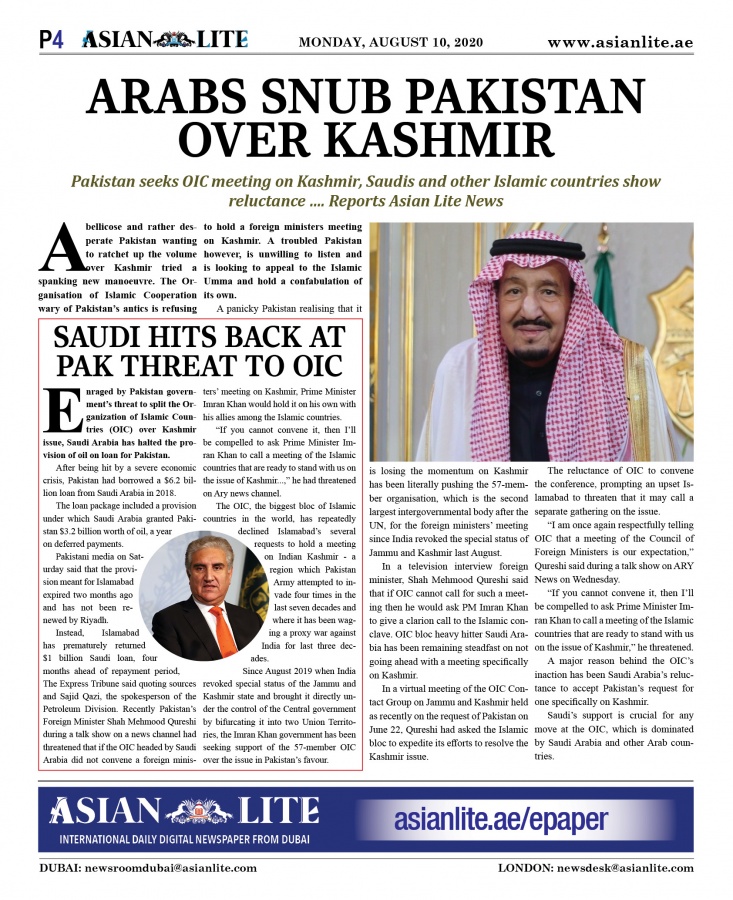 “If you cannot convene it, then I’ll be compelled to ask Prime Minister Imran Khan to call a meeting of the Islamic countries that are ready to stand with us on the issue of Kashmir,” he threatened.

A major reason behind the OIC’s inaction has been Saudi Arabia’s reluctance to accept Pakistan’s request for one specifically on Kashmir.

Saudi’s support is crucial for any move at the OIC, which is dominated by Saudi Arabia and other Arab countries.