How we remember history matters because it defines our present. Learn the past to understand why we are where we are at present. How important this is has been shown by the astonishing rise of the Black Lives Matter movement. This movement is driven by the desire of black people to reclaim their history, the story that has historically been whitewashed or so twisted as to be unrecognisable. This is particularly relevant just now.

On 15th August as India celebrates Independence Day, Britain will celebrate VJ Day, victory over Japan in the second world war. This year marks the 75th anniversary of that victory and while the celebrations will not match the fervour of the VE celebrations in May which marked the victory in Europe it will still be an important moment.  But unlike the war against the Nazis this was not a straightforward fight between good and evil. It was more complicated, a fight that quite unexpectedly resulted in Asia getting freedom and needs to be understood if we are to move forward.

Let there be no doubt that the Japanese had their own master race theory which was not much different to that of the Nazis.  Japanese dealt with their fellow Asians, particularly the Chinese, in a far more barbaric fashion, then they did their white prisoners. The Hollywood film Bridge on the River Kwai told millions of how the Japanese treated the Europeans in their captivity. Yet more Tamils died building the death railway in Thailand than Europeans. Japanese treatment of Koreans and Chinese were horrific and neither country has ever forgotten or forgiven the Japanese for what they did. Indeed, both countries feel that unlike the Germans, who have come to terms with their history, the Japanese have not.  And they are not wrong.

But having said the war against Japan was different because Japan attacked not the European heartland but European colonies in Asia where the Europeans had for centuries held in bondage brown people. Indeed, in these European empires of Asia the Europeans made no secret they believed in the master race theory. Here it is worth emphasising that the British during their imperial rule called themselves Europeans, identifying themselves as part of the European race,  and all the British institutions in India were called Europeans. So, the clubs which excluded Indians were, as the clubs made clear, for Europeans only.  In other words, the Japanese, brutal as they were, were not attacking free nations. They were attacking nations that believed that people of inferior races should be held in slavery. I use that word because that is the word Indians themselves used to describe British rule in India, Angrezzo ki Ghulami, the slavery of the English. The Europeans did not see it that way. They argued that British were superior to any Indian ruler India had ever had.  And the Europeans had no desire to set their brown Asian colonies free.

While in the Second World War the Allies made much of the fact that it was a fight for freedom from Nazi tyranny the European powers made it clear it did not extend to their colonies. Churchill exempted India from the freedom provisions of the Atlantic charter, Australia said the White Australia policy was sacrosanct and De Gaulle, leading the free French, summed up the view of many in France that the end of the war would see France resume, indeed strengthen, its pre-war colonial rule.

Such was the belief in the supremacy of the white races that racism even extended to the League of Nations set up to stop further wars. The Japanese proposal that the League have a racial equality clause was vehemently opposed by the delegates of the British Empire in particular the Australians, who feared it would destroy the country’s “White Australia” policy, and New Zealand. At the Paris Peace conference, the Japanese secured a majority but Woodrow Wilson, the American President and a southerner, who did not believe in equality for his country’s blacks, ruled it out arguing that strong opposition meant the majority vote could not stand.

The war with Japan was very racial in nature. Germans were considered dreadful, but they were never seen in the way Japanese were because the Japanese were non-white. In his brilliant book War Without Mercy the historian John Dower has shown how the war in the Pacific was horrific and “fuelled by racial pride, arrogance and rage”. Western diplomats referred to the Japanese as “monkeys” and “yellow dwarf slaves”. According to Andrew Rooney, a former marine, US forces “did not consider that they were killing men. They were wiping out dirty animals.” As for President Truman, who authorised the dropping of the atom bombs on Hiroshima and Nagasaki,  “When you have to deal with a beast you have to treat him as a beast.” Interesting that on this he was agreeing with Hitler. Japan may have been his ally but as Japan defeated the Europeans in Asia he regretted that German help was destroying “the position of the white race in East Asia”  and he talked of sending 20 divisions to help throw “back the yellow men”.

America did have Asian allies but because they were Asian, Americans considered them inferior. The war against Japan led to an alliance between America and nationalist China. However, America barred Chinese and other Asians from coming to America. Despite the Statue of Liberty’s clarion call for the poor, huddled masses to come to America, this had never applied to non-whites. The White immigration policy adopted in 1917 had created an “Asiatic barred zone” which stopped a whole swathe of people from Asia and the Pacific from going to America and the Supreme Court often upheld provisions barring Asians from becoming US citizens. After Pearl Harbour the US Congress praised China for its “gallant resistance” against the Japanese but Chinese themselves were not welcome in the US, even Chinese seamen taking shore leave in the US were arrested for fear they may settle in the country. Not only did US and Britain not allow  Chinese courts to try British and American citizens for crimes committed on Chinese soil, but between 1882 and 1913 no less than fifteen laws, or parts of US law, had mentioned the Chinese as undesirable immigrants, no other country had been so dishonoured by US lawmakers. 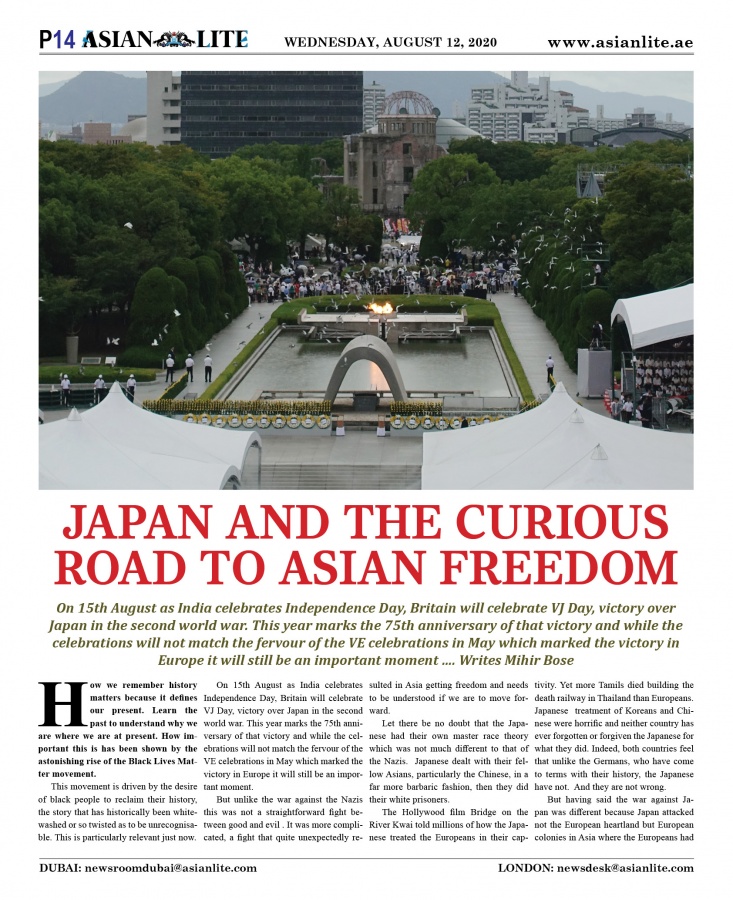 The war did lead to a nationwide debate about these racist laws which lasted to the end of 1943 and resulted in some revision. The US allowed for a maximum of 105 Chinese eligible for naturalisation to immigrate to the United States each year. Even then Congress had to overcome protests from groups such as the American Legion, the Veterans of Foreign Wars and the American Federation of Labour. 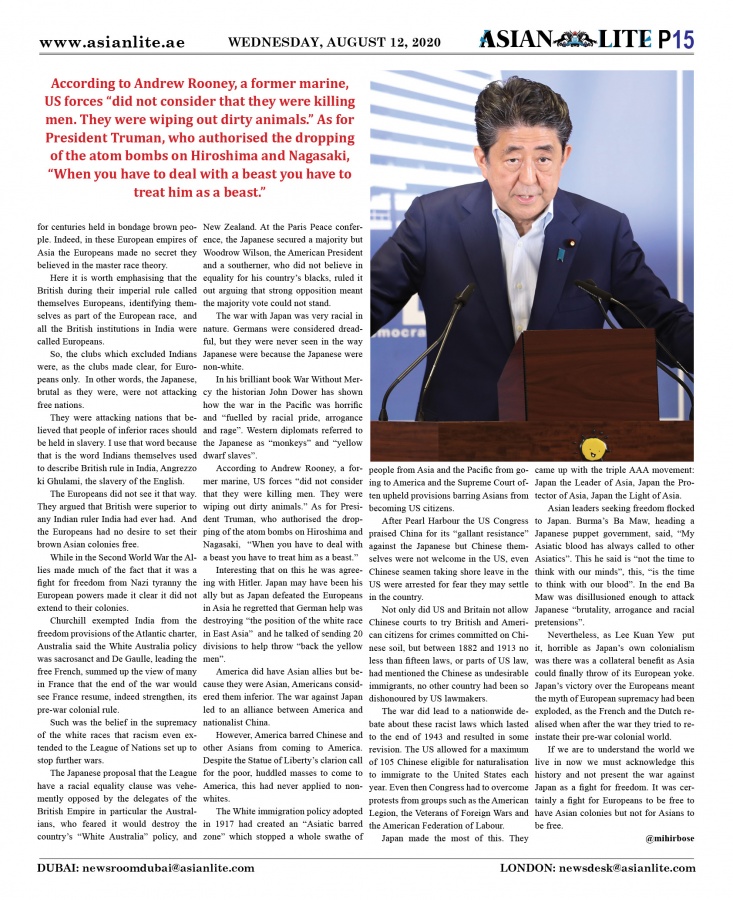 Asian leaders seeking freedom flocked to Japan. Burma’s Ba Maw, heading a Japanese puppet government, said, “My Asiatic blood has always called to other Asiatics”. This he said is “not the time to think with our minds”, this, “is the time to think with our blood”. In the end Ba Maw was disillusioned enough to attack Japanese “brutality, arrogance and racial pretensions”. Nevertheless, as Lee Kuan Yew  put it, horrible as Japan’s own colonialism was there was a collateral benefit as Asia could finally throw of its European yoke. Japan’s victory over the Europeans meant the myth of European supremacy had been exploded, as the French and the Dutch realised when after the war they tried to reinstate their pre-war colonial world.

If we are to understand the world we live in now we must acknowledge this history and not present the war against Japan as a fight for freedom. It was certainly a fight for Europeans to be free to have Asian colonies but not for Asians to be free.